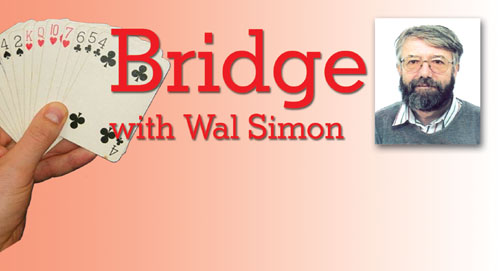 This is a true story.  I should know, I was sitting east in a local club.

South opened two clubs - so far so good.  North bid a negative two diamonds.  Now south, not sure what to do next - two no-trumps would have been best - bid four no-trumps, Blackwood.  North bid five diamonds, showing his ace, and south knowing that his side held all the aces and kings bid seven no-trumps.

To the amusement of everybody at the table declarer made only his aces and kings, going five down.  A glance at the two hands shows there is no play for a high level contract.

South’s bid of four no-trumps was asking for trouble.  His hand had no intermediate cards and his distribution was completely flat.

Slam bidding is a big subject but I would like to make a few points this month.

- In bidding a suit slam I try to visualise the two hands together, as they are bid (not always with success) to see whther there is a good source of tricks.  This often beats point counting.

- In pairs you should generally bid a slam which is 50%. A finesse which is 50% where you also need a three-two trump break (68%) is less than that.  Multiply the two chances and you get 34%.

- In a suit slam do not forget that a double fit can generate a lot of tricks.

- Finally you need tricks for a slam, not just aces and kings’ as this month’s south forgot.

Up to the wire 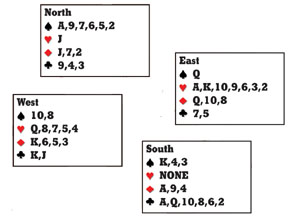 This was the last and deciding hand of this year’s UK Schapiro Spring Foursomes.

The Penfold team reached five spades doubled after east-west had bid to five hearts.  East led a top heart, declarer ruffed and drew trumps.  He lost a club but the rest of the suit was good for twelve tricks.

On the other table the Sinclair team reached six spades.

There are two schools of thought on leads in such circumstances.Some lead their known strong suit.  Others lead another suit because they expect declarer will be ready for the strong suit.

East was of the second school and led the eight of diamonds.Declarer won with the ace, but when he took the inevitable club finesse which lost, the defence cashed two diamonds.